The Fall of Sky Woman 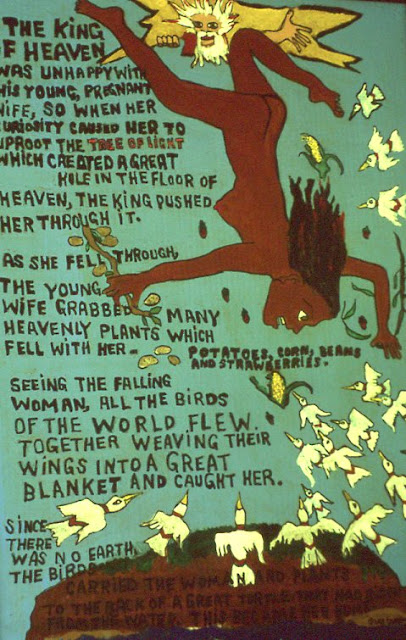 The Fall of Sky Woman

The first time that I heard the legend of the Fall of Sky Woman, I was in upstate New York at a Native American Conference on the Seneca Reservation some fifty years ago.  In later years, I heard fragments of the same story in Cherokee and Choctaw folklore, and came to believe that this story was once a part of the legends of all Southeastern tribes.  The legend tells how an ancient god of the heavens grew lonely and sought the companionship of a young woman who became pregnant when he blew in her ear.  He brought her home to live with him, but in time, he grew tired of his young wife's constant chatter.  She was very curious and ask the old god many questions.  One day, he returned home to find that his young wife had dug up the Tree of Light in order to lean where its blue glow originated.  As a result, there was a huge hole in the floor of Heaven and the young wife was down peering through the hole.  There was nothing below but a great swamp and flocks of Heavenly Birds that flew back and forth.  Seeing an opportunity to be rid of his young wife, the old god kicked her through the hole.  As she fell, she dragged many heavenly plants through the hole with her.  There were potatoes, beans, corn and strawberries.  When the Heavenly Birds saw the falling woman, they wove their wings together into a great blanket and caught her.  Then, the birds flew down to the swamp and asked an old turtle to put his back above the water so they could deposit the young woman.  The turtle agreed and his back became the first Earth on which the woman lived with her heavenly vegetables.  That is not the whole story, of course.  Falling Woman gave birth to twins and then another story begins....a tale that is much like Cain and Able.

I believe I have painted The Fall of Sky Woman three times and each painting was sold for $800.  Each was purchased by a members of my elderhostel class at Junaluska.  Prints are available for $200 and can be purchased at Livingston's Studio in Sylva.